I have been programming and planning classical music festivals for over 10 years.  I have an inexhaustible fund of ideas, an in-depth knowledge of repertoire and a host of professional contacts in the field.

I am director of Elgar in Sussex, a biennial chamber music festival based in Fittleworth, West Sussex where, between 1917 and 1920, Elgar rented a cottage, Brinkwells and composed the late great works of his maturity: the violin sonata, string quartet, piano quintet and cello concerto.  Elgar in Sussex sets these works in their creative contexts, with performances, talks and walks illustrating the crucial connections between music and place.  The festival takes place over Elgar's birthday weekend, the first weekend of June, in a series of unique indoor and outdoor venues in and around Fittleworth, resonant with Elgarian associations.

Your celebration of 100 years of Elgar in Sussex was superb...I shall never forget the happiness you gave me, and your inspiration.
Rosina, attendee
​
A truly delightful Elgar festival...an unforgettable weekend.
The Elgar Society News 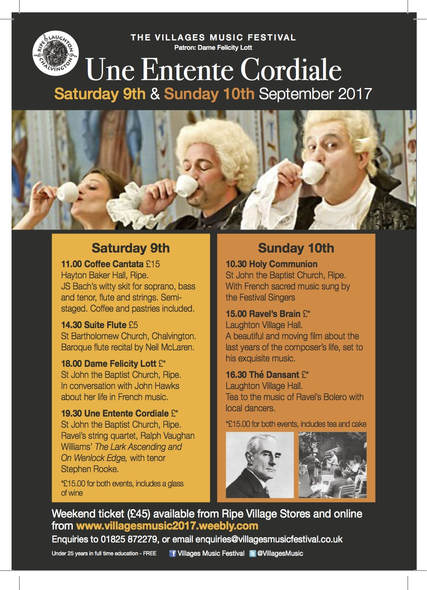 InI have been artistic advisor to the Villages Music Festival since 2016.  In the first year, I programmed Music of the Hills, a chamber concert featuring piano quartet and voices which met with great acclaim.  In 2017, I was commissioned to programme a chamber music weekend around the showing of a film about Maurice Ravel's last illness and death.  Une Entente Cordiale took as its theme the relationship between Ravel and Ralph Vaughan Williams, culminating in a chamber concert featuring the former's string quartet, and the latter's On Wenlock Edge and The Lark Ascending in my own arrangement for chamber ensemble.

​In 2018, I programmed a retrospective of composer Ruth Gipps, a neglected master of British C20th music, who retired to the Sussex countryside and used to play the organ for the three villages.  Ruth Gipps - The Piper of Dreams wove chamber works by Gipps in with other seminal British works of the C20th: Bliss's Conversations, Elgar's early Andante and Allegro Moderato for oboe quartet, and pieces by her composition teachers, Ralph Vaughan Williams (his evergreen The Lark Ascending) and Gordon Jacob (Four Fancies).
Powered by